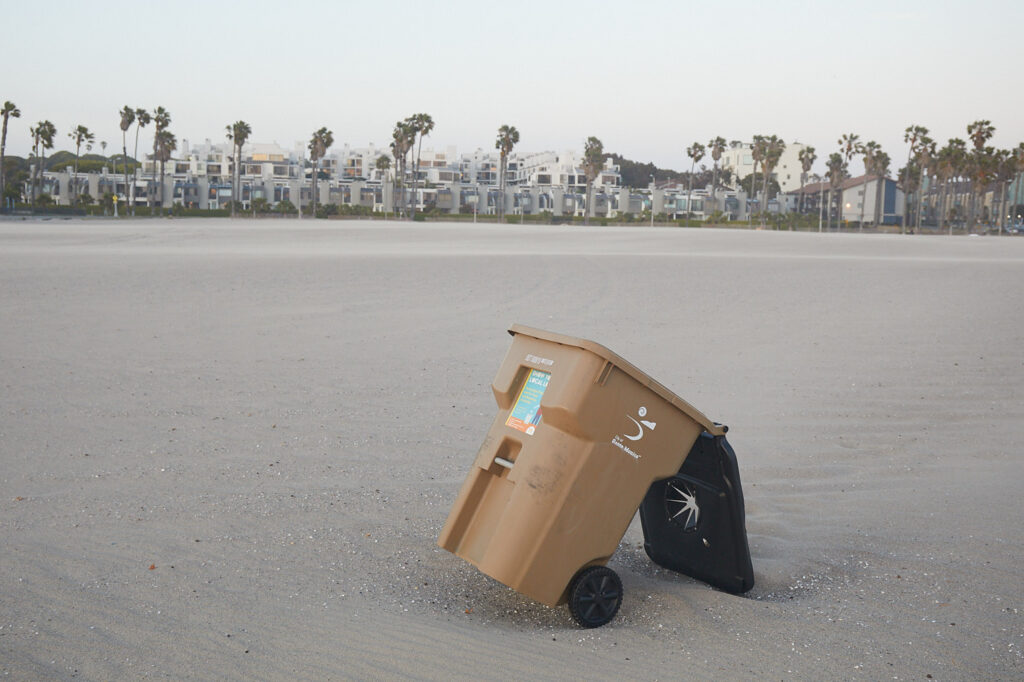 Venice Beach in Los Angeles, California: In an endless chain trash cans stand guard on the beach from Marina del Rey over Venice Beach to Malibu. There are hundreds of them all dressed in uniforms of black or brown, their mouth open to swallow what we no longer need nor want. They want what we don’t want, but do they get it?

Not as often as they’d like it. Yes, often people dutifully do their pilgrimage to sacrifice their trash to the trash bin for the greater beauty of the beach.  But often their big mouth stay open and their bellies have to remain empty while they are forced to watch people blind to beauty and inept to feel respect throw their junk right on the beach. You could create a distribution bell curve at which distance from a trash can garbage can be found and correlate distance to character quality of the garbage dropping person.

Almost every week I see a girl walk along the beach with a bag and a giant set of tweezers and pick up the junk that others were too lazy to get into the trash can. There are groups who meet and then walk a line across the beach like a human chain exploring a crime scene for leads. It’s a constant fight of those respecting the beauty of the ocean and its beaches against the knuckleheads who throw their trash away without consideration. Or with consideration when they arrange their trash to spiteful sculptures of disrespect. Then there are the bums who burn things on the beach and leave a trace of junk wherever they spend the night. And so many trash cans remain empty while the trash collects at the beach.